The Kind of Power Everyone Needs

When you consider how limited our understanding is of just why electricity behaves the way it does, it is remarkable that its utility is so widespread and crucial to our lives. From shopkeepers to homeowners, from institutions to industry, everyone needs it, and needs it all the time. Of course, in South Africa, that is a sore point, as the national power supply has been erratic at best, and a total shamble at worst, for the longest time now. Enter power generators, the logical answer to a failing parastatal supply. From relative obscurity employed on farms, by fieldworkers in some industries, and by those who were never part of the national grid, power generators have become ubiquitous in the country.

This is no surprise, as people’s innate ingenuity scrambled for a logical solution that adequately filled the gaps left by absent state power. Today, power generators populate homes, stores, factories, schools, and even the local service station down the road. Every business needs electricity to produce its wares, present to clients, and make and receive payments. Whether it is a simple small store with lighting requirements and the need for an electric till to generate a sales slip, or a mining house running huge amounts of heavy machinery and daily mining operations on electricity, its role is undeniable – it is the power every modern commercial entity needs.

Without power generation, homes grind to a halt – no cooked food, no heat, no light, no automated washing, and definitely no entertainment－while businesses grind to a halt too – no profitability! In fact, until South Africa started suffering such an erratic electricity supply, a great many people were unaware of just how debilitating its absence could be. Power generators might have been the products of an obscure industry sector years ago, but today, they are front and centre in keeping our economy’s wheels on.

Although there were teething problems in rolling power generators out to all and sundry, these were largely the product of two unfortunate realities. One, people did not know power generators, did not understand their innate abilities based on their design and build, and also failed to match them to a clear set of requirements. The result was that many generators failed in application because of such mismatching, while dampening enthusiasm for further uptake. Two, overseas (and some local) companies began supplying especially smaller generators to all and sundry, and these machines were often not suitable for the purposes they were sold for, as well as being either poor quality manufacture, or seldom serviced, or both. All of this added up to a diminished perception of power generators being a viable solution to our persistently erratic power supply.

That said, it was possibly necessary for South Africa to go through such a learning curve, so that we today are at a point where most companies understand the basic principles of power generators, including how to select and care for them. During this time, alternative energy options have also grown in number and efficiency, but they are still not readily available. Indeed, we are at a point now where “Have you got a generator?” is such a common question, it is indicative of just how appropriate and successful power generators have been in keeping commerce and industry afloat. Many stores make a sales point out of the sign in the window that says something in the line of: “We’ve got a generator, so we’re still open when the power’s off”.

While of course the ideal is to be able to flick a switch in exchange for a monthly bill, South Africans long ago lost the notion about that ideal regaining its status as the default reality. Today, that kind of always-on utility typically comes from a power generator, and they come in all shapes and sizes, being applied to almost any industrial or commercial function you can mention.

Choosing a power generator is where its utility begins, as a generator’s ability to perform as needed has to be honestly determined by the company making the purchase. Again, broadly speaking, South Africans tended to be more optimistic ten years ago, and frequently “bought down” when shopping power generators. They anticipated greater performance from their chosen power generator (and diminishing blackouts going forward), only to find that it could not cope with their demands, and definitely not over the long term.

Premature failure and frustration often followed. Today, most businesses are wiser about throwing money away on unsuitable machinery, and it is always better to “buy up” – buying a generator that can easily meet your immediate and near-future power needs without overworking.

Noise levels are a consideration when shopping power generators, as is the housing, exhausting, and maintenance of the machine. Safe operational guidelines need to be adhered to, and therefore, the positioning of the generator needs to be mapped out in advance, as well as the appointment of professional maintenance contractors. Your car might forgive you if you drag on service, but (especially diesel) generators are less understanding, and will die premature deaths and cost a whack to replace, if something as simple as regular maintenance is shirked.

Buy a little bigger than what is needed in anticipation of future growth, and for the sake of the machine easily meeting immediate requirements. Power generators are pretty smart solutions when you think about it, and smart solutions deserve smart decisions when purchasing. Do not make the solution appear dumb by skimping on what you really need! Professional manufacturers can custom build your ideal power generator, and thus avoid all the common errors in application.

At PacB, we eat, sleep, and breathe power generators. We have equipped some of the top companies in the country with their power solutions, and we also provide a highly skilled, professional maintenance service.

Call on us to discuss your industrial generator needs, and we promise you prompt service and exceptional results from using our machines.

Avoid joining those for whom power supply is still frustrating because they purchased incorrectly or failed to treat the generator to the services it requires from time to time.

Contact PacB Group today, and we will keep your lights on tomorrow! 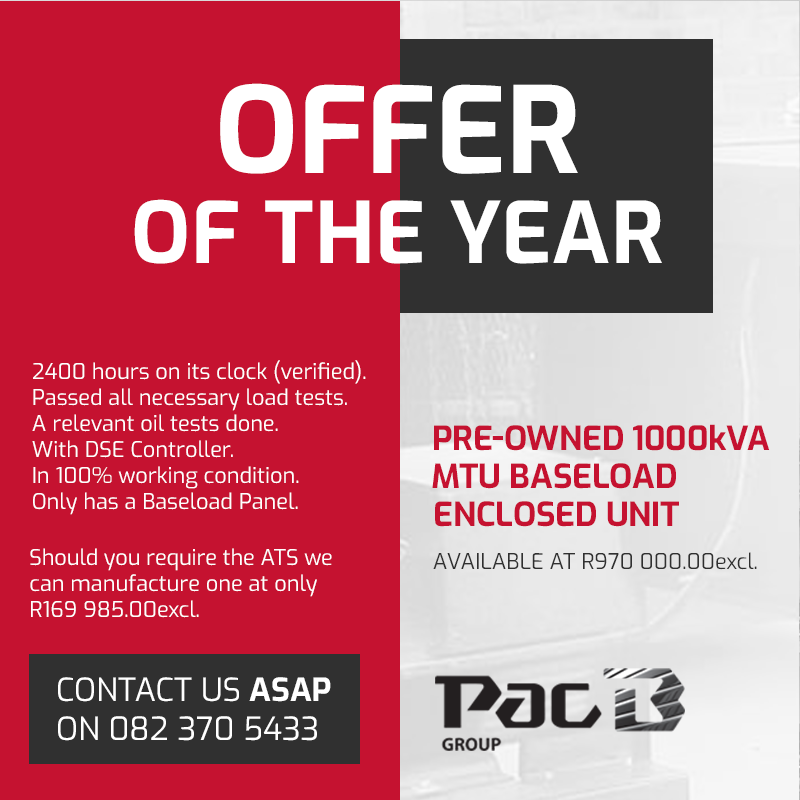